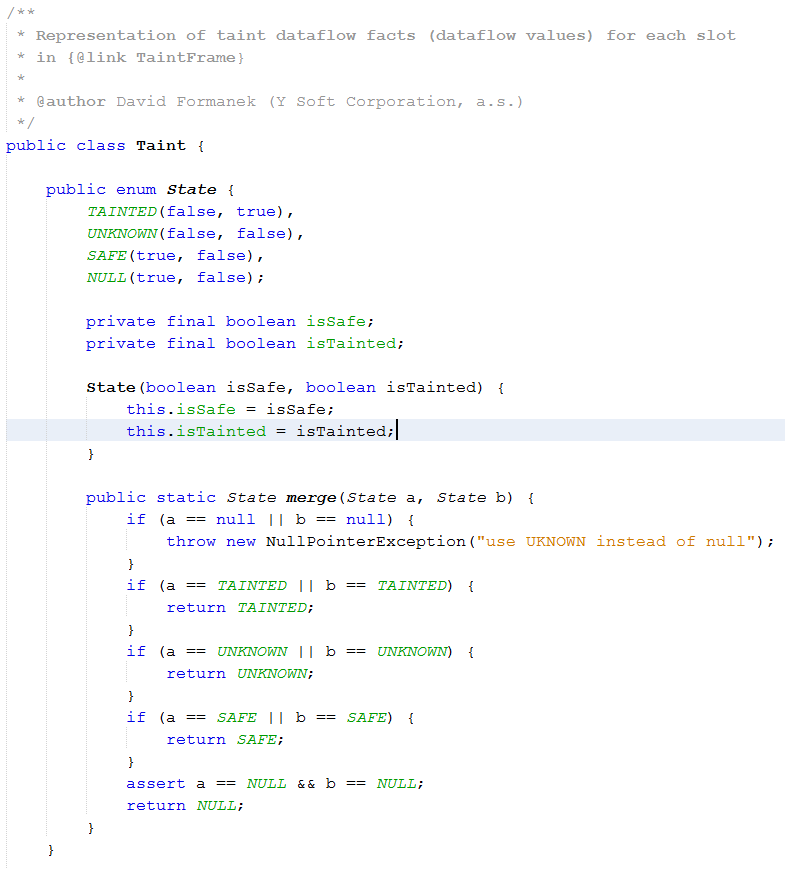 After finishing hard-coded passwords detector, I have focused on improving the detection of the most serious security bugs, which could be found by static taint analysis. SQL injection, OS command injection and Cross-site scripting (XSS) are placed as top first, second and fourth in CWE Top 25 most dangerous software errors (while well-known buffer overflow, not applicable to Java, is placed third). Path Traversal, Unvalidated Redirect, XPath injection or LDAP injection are also related types of weaknesses – unvalidated user input can exploit syntax of an interpreter and cause a vulnerability. Injections in general are the risk number one in OWASP Top 10 too, so a reliable open-source static analyser for those kinds of weaknesses could really make the world a more secure place 🙂

FindBugs already has detectors for some kinds of injections, but many bugs is missed due to insufficient flow analysis, unknown taint sources and sinks and also targeting zero false positives (even though there are some). In contrast, the aim of bug detectors in FindSecurityBugs is to be helpful during security code review and not to miss any vulnerability – there was some effort to reduce false positives, but before my contribution almost all taint sinks were reported in practice. Unfortunately, searching a real problem among many false warnings is quite tedious. The aim of the new detection mechanism is to report more high-confidence bugs (with minimum of false positives) than FindBugs detectors plus report lower-confidence bugs with decreased priority not missing any real bugs while having false positives rate much lower than FindSecurityBugs had originally.

For a reliable detection, we need a good data-flow analysis. I have already mentioned OpcodeStackDetector class in previous articles, but there is a more advanced and general mechanism in FindBugs. We can create and register classes performing a custom data-flow analysis and request those results later in detectors. Methods are symbolically executed after building control flow graph made of blocks of instructions connected by different types of edges (such as goto, ifcmp or exception handling), which are attempted to be pruned for impossible flow. We have to create a class to represent facts at different code locations – we want to remember some information (called a fact) for every reachable instruction, which can later help us to decide, whether a particular bug should be reported at that location. We need to model effects of instructions and edges on facts, specify the way of merging facts from different flow branches and make everything to work together. Fortunately, there are existing classes designed for extension to make this process easier. In particular, FrameDataflowAnalysis models values in the operand stack and local variables, so we can concentrate on the sub-facts about these values. The actual fact is then a frame of these sub-facts. This class models effects of instructions by pushing the default sub-fact on the modelled stack and popping the right amount of stack values. It also automatically moves sub-facts between the stack and the part of the frame with local variables.

Lets have a look, which classes had to be implemented for taint analysis. If we want to run custom data-flow analysis, a special class implementing IAnalysisEngineRegistrar must be created and referenced from findbugs.xml.

This simple class (called EngineRegistrar) makes a new instance of TaintDataflowEngine and registers it with global analysis cache.

Thanks to this, in the right time, method analyze of TaintDataflowEngine (implementing ImethodAnalysisEngine) is called for each method of analyzed code. This method requests objects needed for analysis, instantiates two custom classes (mentioned in next two sentences) and executes the analysis.

TaintAnalysis (extending FrameDataflowAnalysis) implements data-flow operations on TaintFrame but it mostly delegates them to other classes.

The taint fact – information about a value in the frame (stack item or local variable) is stored in a class called just Taint.

The most important piece of information in Taint is the taint state represented by an enum with values TAINTED, UNKNOWN, SAFE and NULL. TAINTED is pushed for invoke instruction with a method call configured to be tainted (e.g. getParameter from HttpServletRequest or readLine from BufferedReader), SAFE is stored for ldc (load constant) instruction, NULL for aconst_null and UNKNOWN is a default value (this description is a bit simplified). Merging of taint states is defined such that if we could compare them as TAINTED > UNKNOWN > SAFE > NULL, then merge of states is the greatest value (e.g. TAINTED + SAFE = TAINTED). Not only this merging is done where there are more input edges to a code block of control flow graph, but I have also implemented a mechanism of taint transferring methods. For example, consider calling toLowerCase method on a String before passing it to a taint sink – instead of pushing a default value (UNKNOWN), we can copy the state of the parameter not to forget the information. Merging is also done in more complicated examples such as for append method of StringBuilder – the taint state of the argument is merged with the taint state of StringBuilder instance and returned to be pushed on the modelled stack.

There were two problems with taint state transfer which had to be solved. First, taint state must be transferred directly to mutable classes too, not only to their return values (plus the method can be void). Not only we set the taint state for an object when it is being seen for the first time in the analysed method and then the state is copied, but we also change it according to instance methods calls. For example, StringBuilder is safe, when a new instance is created with non-parametric constructor, but it can taint itself by calling its append method. If only methods with safe parameters are called, the taint state of StringBuilder object remains safe too.  For this reason, effect of load instructions is modified to mark index of loaded local variable to Taint instance of corresponding stack item. Then we can transfer taint state to a local variable with index stored in Taint for specified methods in mutable classes. Second, taint transferring constructors (methods <init> in bytecode) must be handled specifically, because of the way of creating new objects in Java. Instruction new is followed by dup and invokespecial, which consumes duplicated value and initializes the object remaining at the top of the stack. Since the new object is not stored in any variable, we must transfer the taint value from merged parameters to the stack top separately.

Bugs related to taint analysis are identified by TaintDetector (implementing Detector). For better performance, before methods of some class are analyzed, constant pool (part of the class file format with all needed constants) is searched and the analysis continues only if there are references for some taint sinks. Then TaintDataflow instance is loaded for each method and locations of its control flow graph are iterated until taint sink method is found. This means, we find all invoke instructions used in a currently analysed method and check, whether the called methods are related to the searched weaknesses. Facts (instances of Taint class) from TaintDataFlow are extracted for each sink parameter of a sink method. Bug is reported with high confidence (and priority), if the taint state is TAINTED, with medium confidence for UNKNOWN taint state and with low confidence for SAFE and NULL (just for the case of a bad analysis, these warnings are not normally shown anywhere). Taint class also contains references for taint source locations, so these are shown in bug reports to make review easier – you should see a path between taint sources and the taint sink. TaintDetector itself is abstract, so it must be extended to detect concrete weakness types (like command injection) and InjectionSource interface implemented to specify taint sinks (the name of the interface is a bit misleading) and items in a constant pool to specify candidate classes.

CommandInjectionSource overwrites method getInjectableParameters, which returns an instance of InjectionPoint containing parameters, that cannot be tainted, and the weakness type to report. Boolean method isCandidate looks up constant pool for the names of taint sink classes and return true if present.

TaintDetector is currently used to detect command, SQL, LDAP and script (for eval method of ScriptEngine) injections and unvalidated redirect. More bug types and taint sinks should follow soon. Test results are looking quite promising so far. Inter-procedural analysis (not restricted to a method scope) should be the next big improvement, which could make this analysis really helpful. Then everything should be tested with a large amount of real code to iron out the kinks. You can see the discussed classes in taintanalysis package and try the new version of FindSecurityBugs.