Each humanoid robot has to meet certain specifications, e.g. maximum dimensions and weight. The rules also require having a head, two legs, two arms and a name. We named our robot YSoft Ragnarök, which is a great foretold battle from Norse mythology. The limit for the weight is 3000 g, which was quite problematic for us. At the beginning of the competition we had to reduce robot’s weight to 2997 g by removing some insignificant parts. Our strategy is a great stability which many other robots lack, but it comes with demand for heavy parts especially at the bottom of the robot. Heavy body also reduces mobility and speed so we had to develop better solution in order to find the opposing robot reliably, then move directly to it and wreck it. For this purpose we used ultrasonic sensors with maximum range of 2 meters, high precision and low power consumption. 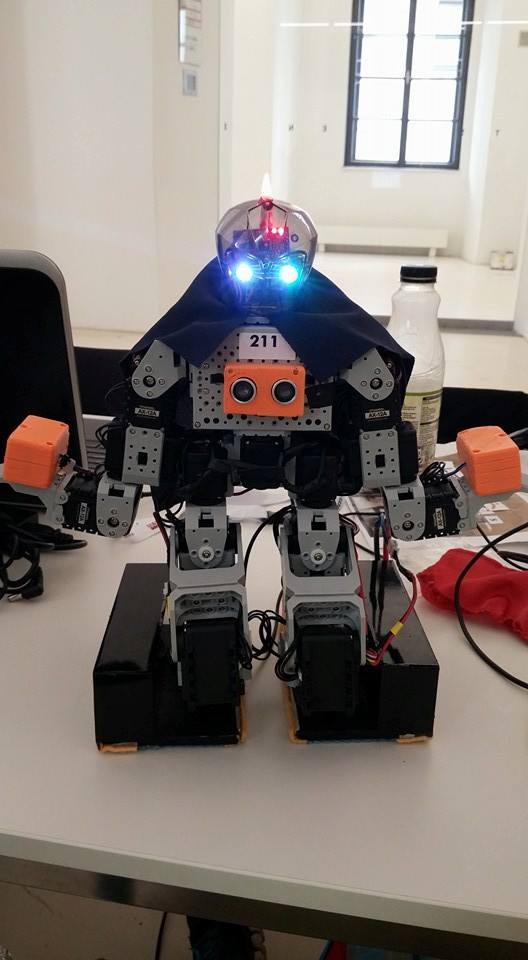 Tournament started with qualifications and continued with single match elimination. Each match startswith two robots in opposing corners facing each other. The main goal is to push the other robot out of the arena or to knock it down. If any robot is pushed out of the arena, it can be placed within the arena again, however it must be placed face down. If the robot can autonomously stand up, the match continues. Team gains 3 points for pushing the other robot out of the arena. If any robot falls in the arena, the opposing team gains 1 point. Two points are awarded for a robot that knocks the opponent to the ground. Match ends if any robot is knocked out (and cannot stand up), it does not move for a period of time or the time for the match runs out (the maximum time is 3 minutes). The competitor with highest score wins.

We have beaten every robot in the qualification group and successfully advanced into the semifinals without suffering a loss. However, this had already happened in the past when we lost the next two matches to finish in the 4th place. This time we tried not to repeat such outcome. The first semifinal match against Mexican robot Speedy Gonzales was quite even as the opponent avoided contact with us so we only managed to knock it down once. The second match versus another Mexican robot Atom was more one-sided because it could not get up after knockout (this match can be viewed here).

Once we got into the finals, we have faced our old rival from Poland, robot DUE. At the end we have beaten them and won the first place (video). Polish robots DUE and UNO took both 2nd and 3rd place.