At Y Soft, we use robots to test our solutions for verification and validation aspects, we are interested if the system works according to required specifications and what are the qualities of the system. To save time and money, it is possible to use a single robot to test multiple devices simultaneously. How is this done? It is very simple so let’s look at it.

For the robot to operate on multiple devices, all of the devices must be within the robot’s operational range, which is quite limited, so this feature is currently is only used for smaller devices, like mobile phones and Terminal Professional. It is theoretically possible to use a single robot on more devices, but for practical purposes, there are usually only 2 devices. Also, all devices must be at relatively the same height, which limits testing on multifunctional devices that have various height and terminal placement. Space is also limited by the camera’s range, so multiple cameras might be required, but this is not a problem as camera calibration also contains the unique identifier of a camera. Therefore a robot can operate on multiple devices using multiple cameras or just a single camera if devices are very close to each other.

Before testing begins, a robot needs to have all calibrations of devices available on the hard drive and all action elements (buttons) need to be within its operational range. Test configuration contains variables such as DEVICE_ID and DEVICE2_ID which need to contain correct device IDs as stored the robot’s database. Which tests will run on the devices and the duration of the tests also need to be specified. Tests used for these devices are usually measurement and endurance tests, which run in iterations. There are multiple variants for these tests, for example, let’s say we wish to run tests for 24 hours on two devices and each device should have an equal fraction of this time. This means that the test will run for 12 hours on one device and 12 hours on the other, which is called consecutive testing. Another variant is simultaneous testing, which means that the robot will alternate between the devices after each iteration for a total time of 24 hours. The robot loads the calibration for another device after each iteration and continues with the test on that device.  This is sometimes very useful should one device become unresponsive, the test can continue on the second device for the remaining time. Results of each iteration of the test for each device are stored in a database along with other information about the test and can be viewed later.

Testing multiple devices with a single robot also makes it possible to test and compare different versions of an application or operating system (in this case on Terminal Professional) without ending the test, reinstalling of the device and running the test again. This saves a lot of time and makes the comparison more accurate. 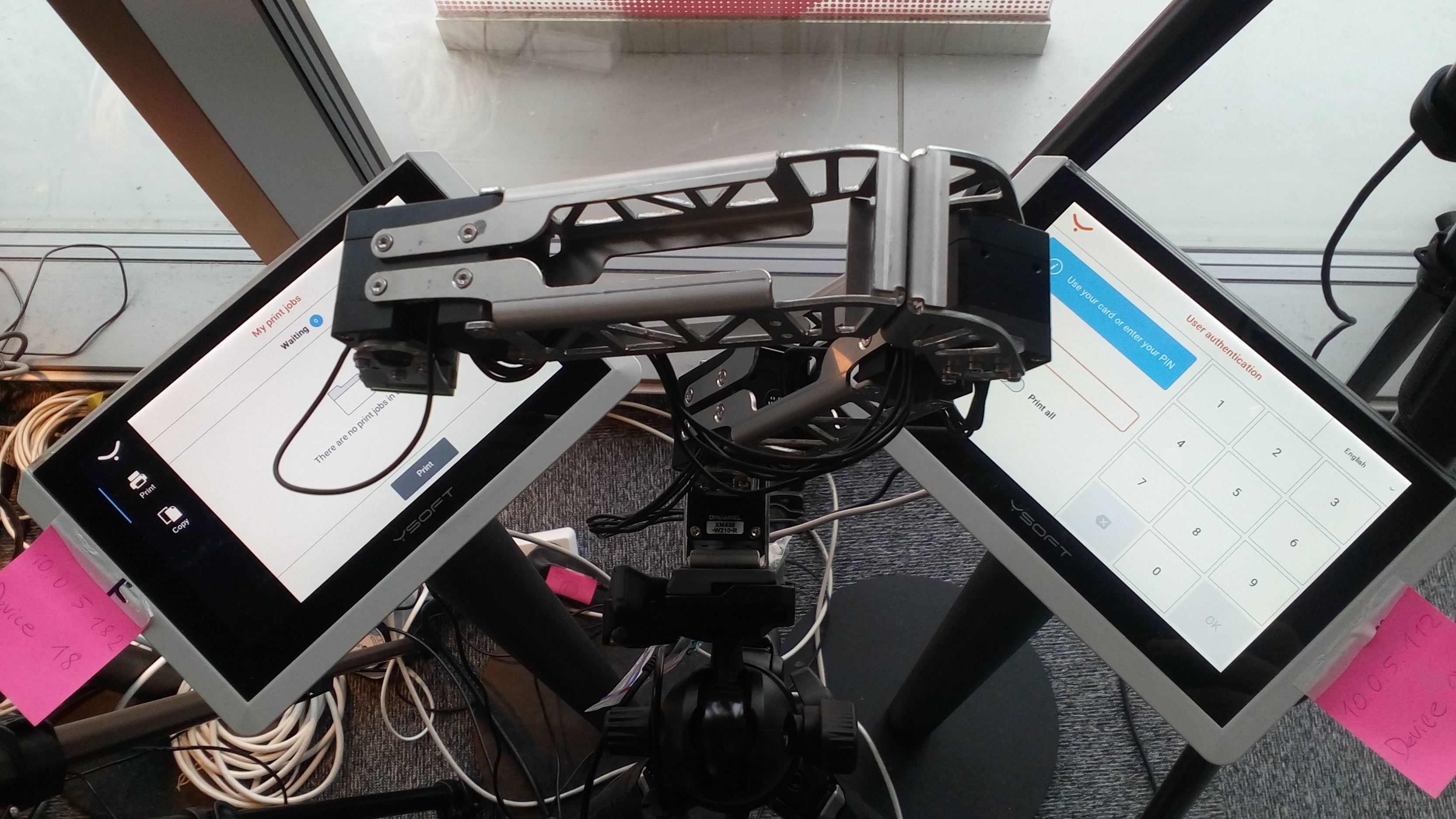 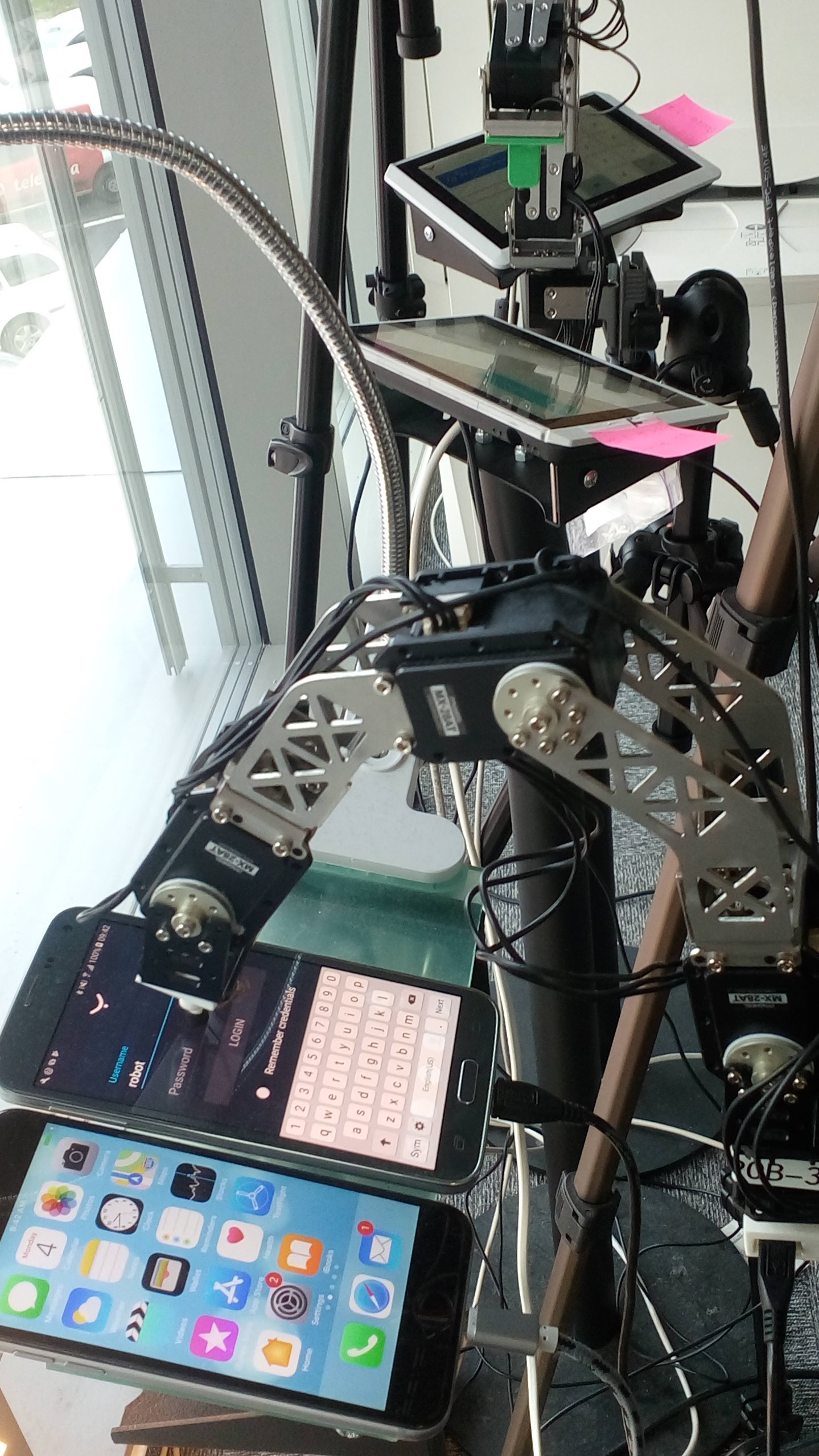 Calibration – how robot learns the environment

In QA we use robotic arm to autonomously operate a multifunctional device (MFD) according to a given test that is repetitive, time consuming or not performable by a human.

How does the robot know where is the screen located? How do the 2D screen coordinates transform to the robot’s system? Robot moves the end effector (stylus) in the 3D Cartesian coordinate system with the origin [0,0,0] at the center of the first servomotor. Position of the stylus is then transformed to angles of all servomotors by inverse kinematics. It is also possible to calculate position of stylus given the angles of the servomotors (forward kinematics). However the screen of the MFD is a 2D plane in the 3D space with unknown origin, dimensions and rotations. Robot needs to know where the screen is located relatively to its origin in order to correctly tap any button on the screen.

Dimensions of the screen need to be measured by hand in millimeters. We use 2D coordinates with origin at the bottom left corner to define position on the screen. In 3D space position and rotation of any plane is uniquely determined by three non-collinear points. If these three points are known, transformation matrix can be found. This matrix multiplied by position on the plane is equal to corresponding position in 3D space.
Previously we used ‘basic’ calibration where the robot is navigated through the bottom left corner [0, 0] (origin of the screen), top left corner [0, height] and top right corner [width, height]. At each corner, stylus’ position (in 3D space) is saved and transformation matrix is calculated. This method of calibration requires a lot of precision because even a slight deviation from the corner leads to a similar deviation in every robot’s tap so robot might not accurately tap the desired button. There is no feedback from the MFD, but sometimes there is no other way to perform the calibration. Yes, you heard right! Developer testing. It means testing done by developers! And yes, I’m talking about the confirmation testing, which is known as “The changelog” in our R&D department. The result – improvement from 50 % to 95 % of tickets closed at the end of a sprint and all sprint goals completed on time 4 sprints in a row! [1] Percentage of work planned and really done over sprints

Our development team has recently been trying very hard to shorten the development cycle of features and fixes. One of the biggest delays we have identified was caused by the tickets waiting in the “To Test” state. It means that the implementation part has been completed and is waiting for a QA Engineer to confirm it’s functionality by testing it. As I was the only tester for 7 developers on the team, the tickets with lower severity had to simply wait, often more than a week. Moreover, the testing activities were concentrated at the end of a sprint. A ticket reopened too late can easily be a cause of a failure in reaching team’s sprint goals.

Generally, it is strongly recommended by the literature to not let developers test their own work. The common reasoning is, that everybody is in love with their creations and would not like to damage them. Also, some defects are approach-related and thus cannot be discovered by the same person with the same approach. Moreover, test planning, test case writing and test data definition need special skills, which developers generally do not possess. Our mindset was changed by our CTO, who saw this as an opportunity to improve efficiency of the development.

In our team, we kept all of the aforementioned risks in mind and tailored the process to negate all of them. We have tried several versions of the process. In a short time we found the most important thing – that we need to differentiate tasks (new development) and defects (bug fixes). You’ll later see why.

Generally, it is much easier to write test cases for known functionality. This is the case for the defects which only fix or slightly modify an already tested feature. Experiences with an existing (sub-)system, where a feature is only updated and testing approaches are well known, help the QA engineer to define a set of all necessary test cases, edge-case scenarios and also expected visual aspects. Therefore, based on the well-defined test cases, a developer should be able to develop the fix and test it in a way, which will ensure it meets quality requirements. Later, a QA engineer interviews the developer to find out his confidence level about the testing and also asks several direct questions about the most critical areas. Based on this information and on the experiences with the particular developer[2], the QA engineer then decides which defects need to be retested and which can be closed right away.

On the other hand, tasks usually represent development of new features. Since the people writing the code in Y Soft are not “coders” but developers, they have to propose solutions for many low-level issues throughout the development process. Therefore, it frequently happens, that some aspects and limitations are discovered later in the sprint, making it very challenging for a QA engineer to define a complete set of test cases in advance. Also, without a proper hands-on the final work, it is also very difficult to define requirements for visual aspects and to judge user friendliness. Therefore, tasks have to always be retested by a QA engineer.

Nevertheless, defining at least some of these tests brings certain benefits that are also common for the defects:

The process itself consists of the following steps:

It is important to note that the aforementioned benefits are only subjectively observed by the members of the team, as none of them has been measured in any systematic way. Doing that would require returning back to the old way of work, in order to make the necessary measurements. Since members of the team are satisfied with the new process , there is no need or motivation to revert back to the old method. A change from less than 50 % to 95 % of closed tickets from the end of Sprint 17 to the end of Sprint 18 and the 100 % fulfillment of sprint goals in the last four sprints presents a sufficiently strong argument to try this process in other teams.

[1] The orange line represents the percentage of developers’ time was planned for a sprint. The time is estimated for each ticket. The green line represents the percentage of that planned estimated time, for which the tickets were closed at the end of the sprint. The first attempt to use developer testing was in Sprint 18. In Sprint 22, we resumed the process. The trend of about 70 % of work planned and more than 90 % finished remains to date.

[2] In order to gain experiences with the developers, there has to be a period of several sprints, where every defect is retested. The QA engineer needs to measure the ratio of closed and reopened defects per developer. During this period the QA engineer can also find out, whether he/she is able to define all necessary test cases beforehand.